This Pro Version allows you to export in ProRes and comes with a License key valid for three different Mac computers. Get muvee 360 Video Stitcher Pro for Mac with 69% Discount Coupon

muvee 360 Video Stitcher Pro for Mac puts the power of the proprietary instant trim engine and stitching profiles for the Samsung Gear 360 camera into one simple to use the software. Simply drag your 360 videos and Pictures, Trim them, add music or even create a slideshow ready to be Share! This 360 Video Stitcher program is the only Mac software that supports the Samsung Gear 360 Videos and Pictures! There simply weren’t any easy to use software to just stitch Samsung Gear 360 media and easily post it to YouTube or Facebook.

The 360 video space is advancing and changing very fast with new cameras being announced almost weekly, hence they are releasing new features and camera support to the community as they develop them. Next in the pipeline includes features like the ability to add music, stitch and browse 360 photos, make 360 slideshows, adjust color, brightness and exposure, add Titles and Captions, etc… The users of muvee 360 Video Stitcher Pro for Mac will get EVERYTHING for the next 36 months. The Pro Version can be installed on up to 3 Macs; great for small production teams and school projects! The Pro license is the most effective insurance to secure your investment in your 360-degree camera and software

To run this 360 degree Video Stitcher with optimum reliability and performance, your system should match the following requirements:

Not sure if this software does what you need? Try it out now. Please feel free to download muvee 360 Video Stitcher Pro for Mac here. This 360 Video Stitcher Software for Mac by muvee Technologies, Inc. has been tested professionally and we are assured that no viruses, Trojans, adware or malware contained.

muvee 360 Video Stitcher Pro for Mac retails for $199.99, But, on our website, THE Software Shop, you can save on your purchase of its license key with 69% discount coupon code. This offer is available for a limited time! 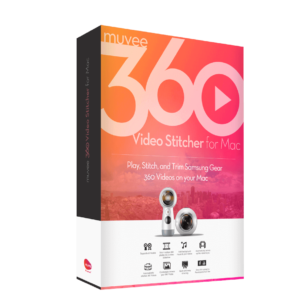 The most powerful Mac 360 Video Editing Software for the Samsung Gear 360 Cameras. Unlock all PRO features!

The discount coupon & your local VAT (Value added tax - if available, vary by country) will be applied at checkout automatically including your local currency will be converted.

The most powerful Mac 360 Video Editing Software for the Samsung Gear 360 Cameras!

The discount coupon & your local VAT (Value added tax - if available, vary by country) will be applied at checkout automatically including your local currency will be converted.

muvee 360 Video Stitcher Pro for mac Giveaway is unavailable at this moment.

* VAT information can be found in the shopping cart
.** All prices shown here are in listed USD (United States Dollar). You can switch to any other currencies during the checkout process.

User Rating: Be the first one!

96% Off on Apowersoft Unlimited: 1-Year SUbscription – Get VIP Account & Unlimited Access to All Apowersoft Software in One Pack – for Windows & Mac

$0.00
TunesKit
GET NOW
Our Partners

Free E-Book of the Week